The Future of Humanity?

Published by Eliyahu on May 21, 2020
Leave a Comment
the devil’s chess board 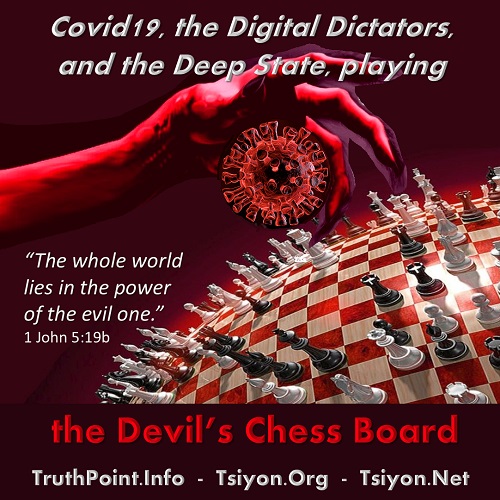 the devil’s chess board

the excerpt, below, is from this week’s Tsiyon News edition

Consider this:
Have you ever played chess? It is played upon a board of 64 squares arranged in an 8×8 grid. Each player begins with 16 pieces, typically either black or white. Each piece type has its own unique moves. However, any of the pieces except the king may be sacrificed or taken in the course of the game. The ultimate objective is to checkmate the opponent color’s king by placing it under an inescapable threat from which it cannot move. To this end, pieces of one color are used to attack and capture the pieces of the other color, while supporting other pieces of the same color. The game typically involves exchanging pieces in an effort to find and manipulate opportunities to advance one’s position in a strategy to win. Although played upon a board, chess is an entirely mental war game utilizing such elements as projection of power, fear of loss, misdirection, and deceit, all for the purpose of manipulating the defeat of the opposing color. The devil is in the details. [To avoid any misunderstanding with anyone, the black and white I’m talking about above has nothing to do with race, and both colors are entirely equal in the game. “Black and white” is also an age-old metaphor for good and evil. None of this is referring to race. Actually, there is only one race – the human race, putting us all on the same footing in this metaphor.]
In our metaphor the devil’s chessboard is the world. [For those who get distracted by such things, I do know the devil’s hand is probably not red. This is a symbol, not meant to be taken literally. It is a spiritual parable, meant to help us better understand something about the real world.] Again, in our metaphor the devil’s chessboard is the world.

Which world is that? The Bible reveals at least three worlds. They are..click here to read the rest of this newsletter or here to subscribe.